Jay Harolds, MD, FACNM, has been named this year's recipient of the Lifetime Achievement Award from the American College of Nuclear Medicine (ACNM). The award was presented in Vancouver, BC, Canada, during the 2013 SNMMI Annual Meeting. 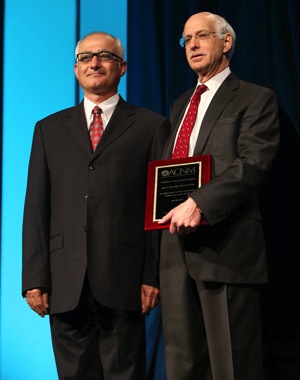 The ACNM Lifetime Achievement Award recognizes a nationally or internationally recognized individual in nuclear medicine with past experience that may include past presidency of major relevant organizations, editorship of related journals, fellow of the organization, and consistent and strong support of ACNM and its goals. The individual selected to receive this honor by the ACNM board of directors for the 2013 fits this description quite well. Dr. Jay A. Harolds has served several medical imaging organizations, including ACNP and ACNM, for many years. He was the ACNP president in 2009 when he led the merge of the ACNP and the ACNM into the current organization. He also spearheaded the effort for making Clinical Nuclear Medicine (CNM) the official journal of the new ACNM. He then became a member of the editorial staff for the journal, and his excellent articles on leadership, management, strategy and other related socioeconomic topics have appeared in the journal regularly. It is challenging to describe all that he has done for nuclear medicine and radiology in a short article. Suffice it to say: he has been the president of 8 organizations in medical imaging and still continues his dedicated involvement with the governance of many of them.

Dr. Harolds received his B.A. in biology from the Harpur College, State University of New York at Binghamton, in 1967, and his MD from the Buffalo Medical School in 1971. He completed his internship in internal medicine and residency in diagnostic radiology at Georgetown University, Washington, D.C., which was then followed by a fellowship in nuclear medicine at Vanderbilt University in Nashville, Tennessee. He has worked both in the private practice as well as in academia and since 2010 has been a professor of radiology and director of the Radiology Residency Program at Michigan State University.

Individuals like Jay are rare in any field. We are very fortunate to have such an accomplished, caring physician in nuclear medicine.