Reston, Va. – A study published in the February issue of The Journal of Nuclear Medicine demonstrates the potential of extending peptide receptor radionuclide therapy targeting the somatostatin receptor to other types of malignancies beyond neuroendocrine tumors (NETs). The theranostic pairing of Netspot (Ga-68 DOTATATE, which is FDA-approved) and Lutathera (Lu-177-DOTATATE, currently under FDA review) has already shown that it can significantly improve progression-free survival in patients with somatostatin receptor-positive NETs.

In contrast to NETs, non-NET tumors, such as breast cancers or renal cell cancers, are not routinely imaged with current somatostatin subtype 2 receptor (sst2) agonist radiotracers (which fully activate the receptor to which they bind and are subsequently internalized). This may change with sst2 antagonist tracers (which bind to the receptor but do not activate it and are not internalized). There is recent in vitro and in vivo evidence that somatostatin receptor sst2 antagonists could be even better tools to target NETs than sst2 agonists, as antagonists bind to a greater number of sst2 sites than agonists.

“The present report is the first quantitative study showing that the number of sst2 receptors that can be targeted in non-NET tumors (such as renal cell cancers or breast tumors) with a radiolabeled somatostatin antagonist can be as high as the number of somatostatin receptors being targeted in NETs with an established agonist,” explains Jean Claude Reubi, MD, Institute of Pathology, University of Berne in Switzerland. “In other words, we can expect that non-NET tumors, which were not considered a routine indication for sst2 imaging using agonists, may now be targeted in vivo successfully with sst2 antagonists.”

In this study, the researchers compared quantitatively iodine-125 (I-125)-JR11 sst2 antagonist binding in vitro with that of the sst2 agonist I-125-Tyr3-octreotide in a variety of cancers, including prostate, breast, colon, kidney, thyroid and lymphoid tissues. NETs were included as a reference.

The researchers report that 12 of 13 breast cancers, all 12 renal cell carcinomas, and all 5 medullary thyroid cancers demonstrated high binding of the antagonist. In contract, the agonist exhibited low binding in the majority of cases. In 15 non-Hodgkin lymphomas, many more sst2 sites were also labeled with the antagonist than with the agonist.

In the various tumor types, adjacent sst2-expressing tissues such as vessels, lymphocytes, nerves, mucosa or stroma were more strongly labeled with the antagonist than with the agonist. The reference NET cases, incubated with a smaller amount of tracer, were also found to have many more sst2 sites measured with the antagonist.

Reubi points out, “The in vitro method used in the study, somatostatin receptor autoradiography, has been shown in the past two-to-three decades to be highly predictive for the in vivo application in patients. Therefore, with the tools (sst2 antagonists) and the expertise (sst2-targeting in cancer patients) available in several clinics, one can assume that these new indications (renal cell cancers, breast tumors, etc.) can be imaged in the near future in patients.”

Rodney J. Hicks, MD, at the Peter MaCallum Cancer Centre in Melbourne, Australia, wrote a review of the study that is also published in the February issue of The Journal of Nuclear Medicine. He noted that the results provide further impetus for the evaluation of somatostatin receptor antagonists in a range of diseases. He stated, “Since cancers can express a range of receptors, development of additional antagonists may further expand theranostic options. For clinicians, faster diagnosis, higher accuracy and stronger evidence of therapeutic effectiveness are the goal.” 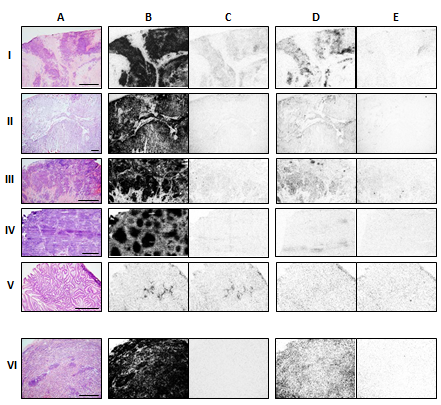 Figure Caption: Comparative receptor autoradiography in various cancer types (A = HE staining) with I-125-JR11 (B+C) and I-125-Tyr3-octreotide (D+E). B and D are the respective total binding, C and E the respective non-specific binding. Bars = 1 mm.

This study was funded in part by support from Octreopharm Sciences GmbH, Berlin, Germany.

Please visit the SNMMI Media Center to view the PDF of the study, including images, and more information about molecular imaging and personalized medicine. To schedule an interview with the researchers, please contact Laurie Callahan at (703) 652-6773 or lcallahan@snmmi.org. Current and past issues of The Journal of Nuclear Medicine can be found online at http://jnm.snmjournals.org.